The Lancashire Telegraph has today published an article in the paper (15th Feb 2017) featuring LambWatch's first lambs of the 2017 season, fathered by Jacob the Boreray and mothered by a Suffolk (who goes by the name Holey Ears). These lambs were born as a result of an experiment, to see if Jacob the Boreray, who is quite small, would be able to "cover" the much larger Suffolk ewe. It appears the experiment proved successful as we now have two very strong and healthy lambs at LambWatch HQ, born on 4th January 2017.

The Lancashire Telegraph visited the farm yesterday to take some photos of this unusual breeding family and wrote an article on page 3 of today's paper! As you can see, Jacob, the ram, is in the background and is much smaller than the Suffolk ewe, pictured in the foreground with the two lambs. A photo of the article is below but to see it full-size, click here. 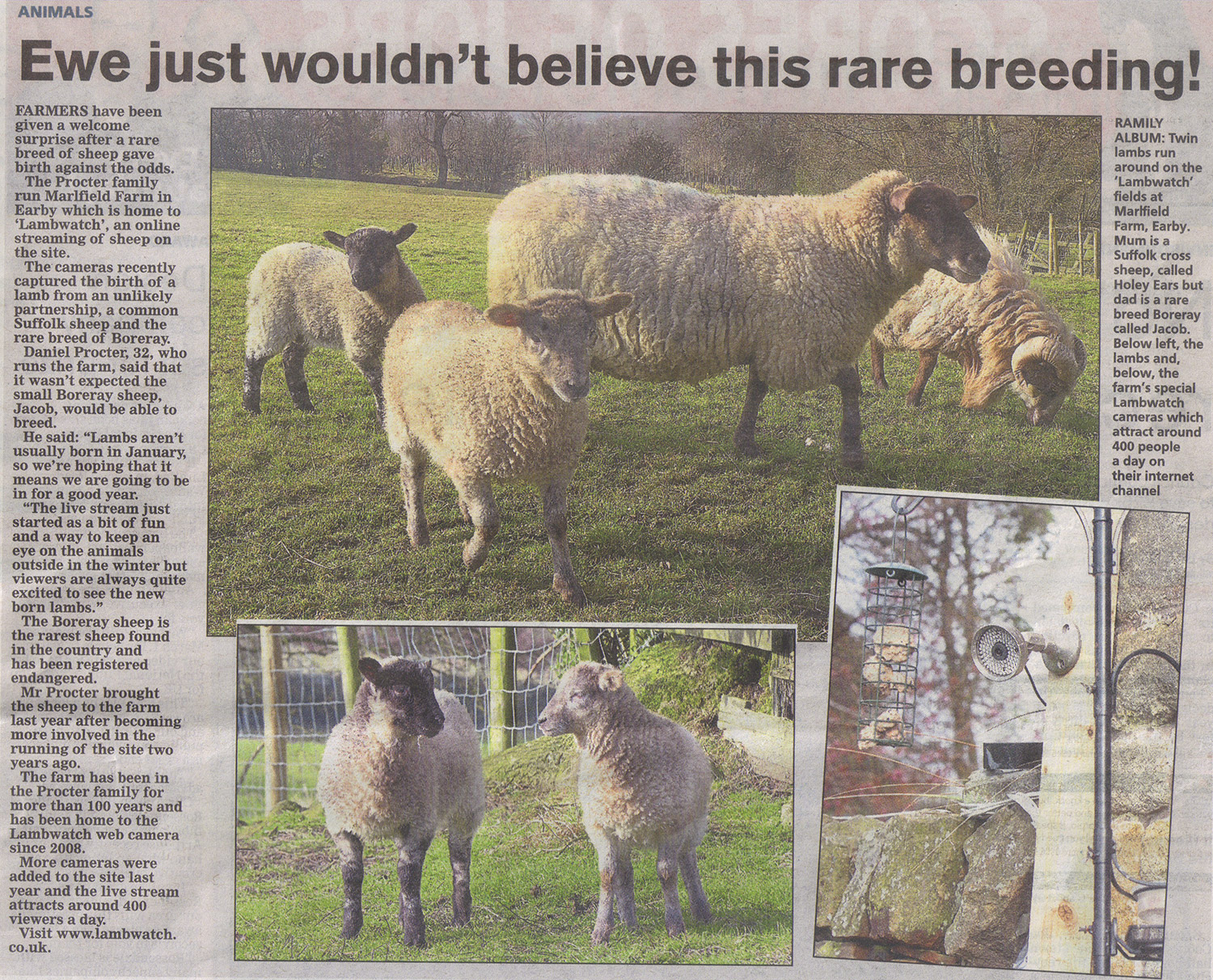 We're pretty happy with the article, though it does sound a bit like we thought Jacob was not able to breed full stop when in actual fact, we just weren't sure if he would be able to breed with the large Suffolk ewe because of his smaller size. He's very capable of breeding with his own breed!

Jacob has also fathered the lambs of the other cross-breed ewes this year, as well as the Borerays. The remainder of the flock are due to start lambing from the 8th March, with one or two due just before. So we're expecting lambs any time! Here's a breakdown summary of who is due and when:

Stay tuned to the LambWatch webcams to watch it happen!

An excellent article and a very good photo with mother, father and the two lambs in the same picture. Hopefully it will bring more Lambwatchers to the site.

Lovely photos and article in the Lancashire Telegraph. It is hard to believe that it is eight years since Lambwatch first started - I remember the old wooden sign and just the one webcam in 2008. Looking forward to watching fields full of lambs in March. Good to read that Jacob has proved himself with his large Suffolk girls as well as his Boreray girls .... well done Jacob.

Brilliant photos in the paper! Well done Jacob !,can't wait to see the new lamb's when they arrive ðŸ˜Š

I just found the online version of the article. It has more photos to look at, including some photos of Boris, Monty and Wispa too. It can be found here: [link]