The next job of the summer season is now complete at LambWatch HQ.

The LambWatch sheep are all now sheared, including the Boreray, looking tidy in their summer outfits. We were able to remove some of the Boreray wool by hand using a process called "rooing" but some of their wool around their shoulders and back end were so heavily matted that it proved very difficult even for the shears to remove! We do wonder if they've ever been sheared before.

We thought the Boreray's behaviour was quite interesting. Out in the field they're still quite timid and shy. But when they are brought in for shearing, or any other reason, they're as good as gold and very patient! It took ages to get the wool off of Flame, and she sat very quietly and patiently for the entire duration. Bless her!

Here is a pic of the Borerays in their new summer outfits... 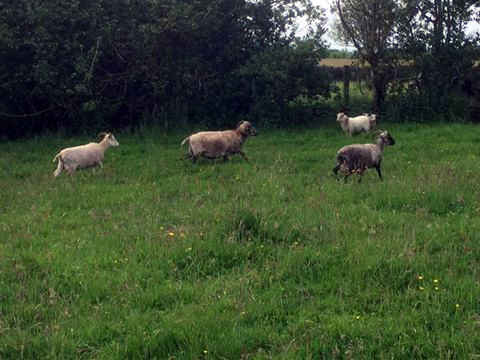 The fleeces from the larger sheep will be off to the Wool Marketing Board but we have kept the Boreray's fleeces here. Heather has been washing them and we hope to be able to spin them once they're clean!

I hope Heather manages to spin the wool off the Boreray sheep as it is very expensive to buy their wool for knitting.

Did you find the shearing any easier Dan? How is Heather getting on with the wool washing and carding etc.?

Hi Margaret - yes it was a little easier this year round but still very hard work! A long way to go before I would say I was competent. Heath'ers washed the wool and but it has not been carded yet as it's quite an expensive process (the device needed to card the wool is expensive).

Hi Dan, The sheared sheep I saw looked fine to me.

I imagined that the carding would be done by hand but maybe that's the old-fashioned way. (I've seen it on tv at sometime)