A well-travelled unexpected visitor is making himself at home at LambWatch HQ!

Last Tuesday we had a new visitor turn up at the farm in the shape of a very tame pigeon! It had a ring on both legs and one had a telephone number written on. He was a very tame little chap and so we knew it was a homing pigeon that had decided to go on his travels for a while!

We telephoned the number on the bird's ring and the chap to whom he belongs is from Worcester - over 150 miles away! He confirmed the bird's name was "Grizzle" and that he had wondered where he had got to after releasing him from Newton Abbot - which is approximately 300 miles away from LambWatch HQ, near Dartmoor National Park!

Grizzle either lost his way home or decided to go for a little jaunt and has ended up at LambWatch HQ!

His owner says that he should return under his own steam but he seems to have made himself quite at home at the farm, spending his time flying between the tractor shed roof and the farmhouse, where he gets fed along with the hens! We are quite happy for Grizzle to stay around but maybe he will leave one day or his owner will come and pick him up... who knows... Grizzle certainly isn't in any rush to leave at the moment! 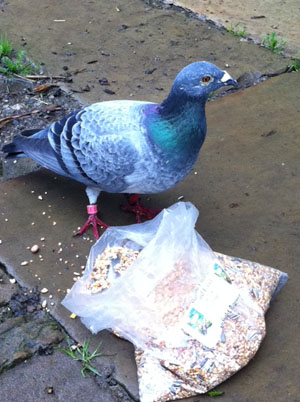 Here is a map of Grizzle's route... not quite as the "crow" flies... but it shows you how far he has travelled!

Isn't that the most amazing thing! He's had a good journey - I wonder how many other stops he has made? Well, he's found a good home, even if only for a while - he knows a good thing when he sees it. He's quite good-looking, too.

Sounds like Grizzle has heard about Lambwatch farm and thought he would visit ... he just might decide to stay as he is being fed and watered so well and who can blame him.. lol. Welcome Grizzle! Enjoy your holiday..

cool, now we have a new friend, even if it is only temporary. Welcome Grizzle I hope you enjoy your time at LW. You have chosen to stop at a great place. Be kind to the sheep and lambs please.

Are we sure Mr. Grizzle isn't Griselda instead? Then we could have lots of little homing pigeons (do they have to be trainedto "home"?)

He is a handsome chap.

Is Grizzle still at the farm??

Grizzle is a handsome bird. If he decides to stay put his owner may very well decide to retrieve him. They are valuable to these hobbyists.