We are all pleased to announce that shearling Ranvir, named after North West Tonight news presenter, Ranvir Singh, successfully gave birth to two male lambs in the afternoon / early evening of Easter Monday!

Everybody is very pleased at the success of this lambing, as, being a shearling, the chances of there being problems are significantly higher. Considering the problems we have had at the start of our lambing season (see forum thread), we were all very apprehensive about Ranvir's lambing. Fortunately, Ranvir is proving to be an excellent mother: having relatively no problems giving birth to two male lambs; though the second needed a helping hand.

Technically, a shearling is a sheep that has only ever been shorn once in its life before and as a consequence, usually this describes a young sheep that has never had lambs before. This describes Ranvir's situation. New sheep mothers, just like new human mothers, are often prone to more problems giving brith than those that have had offspring before.

For a good while now, Ranvir has been living in fields with only one "room-mate": Marion. Marion, too, is a shearling, and is expecting lambs for the first time this year. Ranvir and Marion have been existing together, keeping each other company, for most of their life on the farm. However, because Ranvir has now had lambs, and Marion is still waiting, we have, for the first time in their lives, separated the two. This is bound to be a bit strange for them both! In the clip to the left, you can see Marion going a little bonkers when she saw all the commotion surrounding Ranvir in the field. Ranvir is now in the LambWatch field with the other healthy families. So much change in the space of about 16 hours for Ranvir!!!

Here are some photos of the birth of the second lamb, which was slightly bigger, and needed a helping tug from Howard: 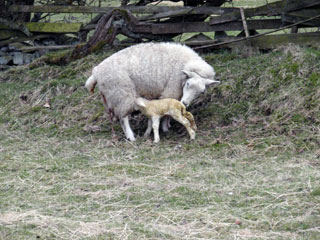 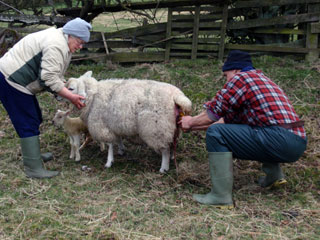 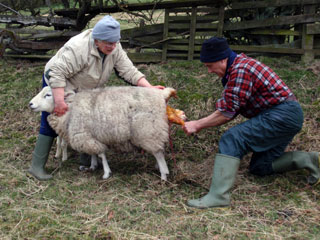 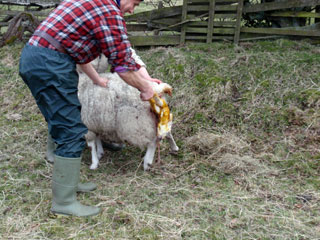 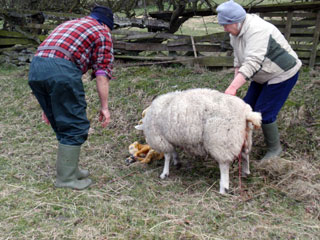 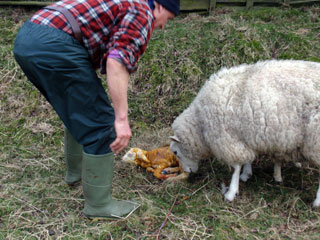 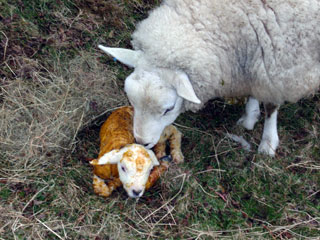 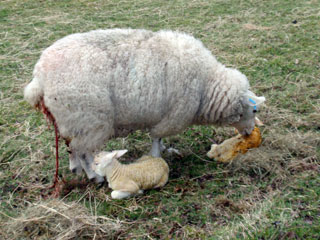 Update: BBC North West Tonight were pleased to hear the news of Ranvir's new babies too! After all, the sheep Ranvir was named after news presenter Ranvir Singh! Lynda was interviewed in the afternoon via the webcam for a small feature that they did after Dianne did the weather. The clip of the programme is below...

Aww hope you informed NWT of this

Awwww I felt quite emotional looking at the photos of Ranvir having a helping hand with her second lamb. Her lambs are as gorgeous as their mum. Congratulations and well done Ranvir!

I am sure nwt will be thrilled when they see these long awaited photographs of Ranvir with her lambs - hope I don't miss the programme when they are featured. So glad Ranvir appears to be such a good mother and her lambs look so strong. Congratulations to all concerned with this famous sheep.

That second lamb looks so big as to be almost full grown! No wonder Ranvir needed some help. Thanks for the beautiful pics. Such a treat to see these new little lives coming into the world.

I am guessing that the second sheep at the begininng of the video is Marion, coming over to see what is going on (or perhaps she thought she could midwife?) It's a beautiful video. Thank you!

they are so cuties glad ranvir okay

our famous sheep she is.

Applause to you Lynda , you are a good interviewer. Although I have some difficult wiyh the accent I inderstand the message. Congratulations to Ranvir and to you !

this is so exciting