A worrying morning searching for lambs ends happily after Sir David spots them in neighbour's fields!

Last night saw some incredibly strong winds with gusts up to 100mph if not more and consistent speeds of between 40 and 50 mph at least. The garden gate didn't survive the thrashing and it looks like our sparkly new bird feeder took a bit of a bashing too. It is a miracle the webcam is still broadcasting!

By far the worst outcome of the storm was the disappearance of Ranvir and her friend, our two tamest lambs, who scattered in the panic of the storm in the night. Howard went out to check them in the morning at 7.45am to find they were no longer in the field they were supposed to be in and spent the rest of the morning looking for them. Lynda went out and joined the search at 10am. It was very worrying as they could have got stuck in a ditch, fallen into the river or worse in the panic last night so it was not looking good.

Howard put a note in our post box for our postman asking him if he would keep a look out for two lambs on their own whilst on his post round. At about 1pm the postman returned to the farm to tell us he had spotted them at Windlefield Farm! The wind spooked them through our bottom gate and through the woods into the neighbour's fields.

Ranvir and her friend were returned home at about 2pm thanks to the keen eye of our postman, who some people here may know as Sir David! This is a big thank you to Sir David for coming to tell us about the lambs and we are all very relieved they have returned back to the farm safe and sound

The pic below shows how far they got. The red enclosed shape is where they should have been and the red dotted lines show where they may have gone (we obviously don't know exactly) and the blue cross shows approximately where Sir David found them (approximately)... It was some adventure they had! 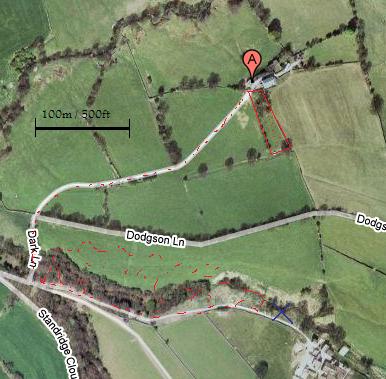 I am so realieved that Ranvir and her friend were found safe and sound. They sure appear to have gone a long way. I would like to thank postman Sir David for keeping a look out for them and quickly notifying Howard and Lynda that he had seen them. Also congratulations and well done to Howard and Lynda (despite not being well) for going out searching and finally bringing them home to where they belong. We certainly hope you will all be able to have a happy and healthy Christmas together.. Luv Fi x

What a day for you all and may I say for us too and so relieved that Ranvir and friend were found safe and well. Thanks to your postman, Sir David, for informing you of their whereabouts. I hope Lynda is none the worse for all the worry with her not feeling too well lately. What a distance the two frightened sheep travelled - thanks Dan for showing us exactly where they were found and their possible route. All the very best for a Happy Christmas and New Year.

Glad everything ended well for all. thanks to god.

I am so thankful that this story had a happy ending and Ranvir and friend were happily returned to the flock. I have needed some good news recently as on Wednesday last one fo my cats Jo died suddenly of a heart attack, it was a horrible experience and I thank Lamwatch for making me smile

Yay, for Sir David! Give that man a Christmas bonus!

So glad to hear Ranvir and friend are home safe and sound. Well done Sir David! Happy Christmas to everyone!

God save all lambs, and the postmans of the UK