Tonight, BBC NWT came to the farm to broadcast the local weather with Dianne LIVE! It was all very exciting stuff!

Because the weather is so important to farmers at lambing time, we all thought that it would be good, as part of the BBC North West Tonight LambWatch feature, to actually broadcast the local NWT weather forecast from the farm one evening LIVE on the programme... and that evening was tonight!

I was very excited and the BBC outside broadcast satellite van arrived at about 3.30pm! Later on the soundman and camerawoman arrived. We were all a bit nervous because Dianne was supposed to arrive at about 6pm so we could do a bit of a rehursal before the live broadcast but she got caught up in traffic! I was very worried that she wasn't going to make it on time but was very glad when she arrived at about 20 past 6 - just 10 minutes before her first live piece on the programme! We didn't have time to do the rehursal so we did it all off the cuff! Dianne the lamb and the North, West and Tonight triplets were all very well behaved and cool infront of the camera and the live audience! 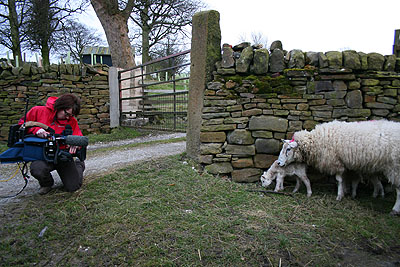 Obviously with the broadcast going out live, we didn't get chance to see the programme as it went out at 6.30 but we recorded it and watched it back later on in the evening and I have to say we were all again thrilled with how it all went and looked on the news (with one small moan in that we are actually in Earby, not Barnoldswick, as the programme said ! Thank you NWT for doing a great job with it and thank you to North, West and Tonight; Dianne (the lamb and the presenter!), Howard, Lynda and Ben (mum, dad and brother) for all appearing in it! Thank you also to everyone who has visited the website and sent us some really nice comments! All in all it was all great fun this afternoon and fascinating to see what goes on behind the scenes for something like this to go out live on the programme.

I have put together all the footage from tonight's programme for you to watch again - links to the downloads are at the top of this article. One of the lambwatch fans (Ian Taylor) has also kindly put together a YouTube video of the news too... it's great that our watchers are joining in the fun too! To see their video piece, visit [link]

Aww, we haven't received any comments on this post yet. Why not tell us what you think?