The weather forecast suggests rain so it's probably a good time to weatherproof the microphone with a makeshift housing unit!

With the weather forecast suggesting rain I thought now might be a good time to weatherproof the microphone with a makeshift housing unit!

The microphone itself is actually composed of an audio board which is literally a sound sensor on the end of 3 open wires. These wires were soldered to the open wires on the end of a special CCTV extension lead which plugs up to our audio input on the PC at the other end. As you can probably tell - when we set it up it was far from weather proof!

Before I put the microphone outside, I made sure the exposed solder joints and wires between the audio sensor and the extension lead were wrapped up in duck(?) tape - a very tidy job!

Next day, I realised that the microphone was really catching the wind and quite deafening even with a slight breeze so I went to Sainsburys and bought some cotton wool balls. After work I put one of the cotton wool balls onto the end of audio sensor which I hoped would help to "dampen" the sounds (a make-shift attempt to make the microphone resemble those fancy professional ones you see covered in fluffy stuff when reporters are recording outside!). To my surprise, the cotton wool ball actually worked really well; and it even survived the really cold frosts we have been getting lately!

Obviously with the forecast now saying rain for the next couple of days, I had to think of a way to make the microphone waterproof.... To do this, I took a plastic water cup and cut a hole in the base, threaded the sensor and cotton wool ball through the hole and sealed it all up with duck tape! The mic is now hanging with the cup upside down so that any rain should just run harmlessly off the side leaving the mic literally high and dry! 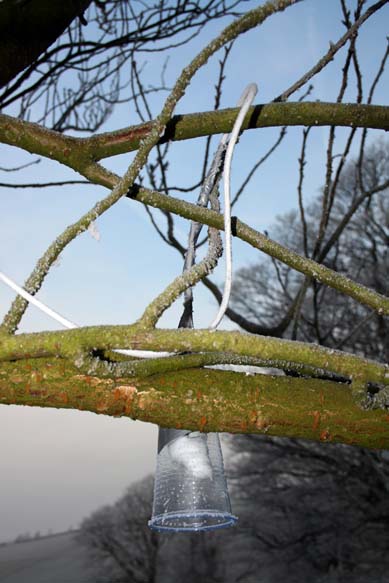 Blue peter eat your heart out!

I guess time will tell just how weather proof it is! Hopefully the sound quality and sensitivity will still be pretty much the same as the end of the cup is open.